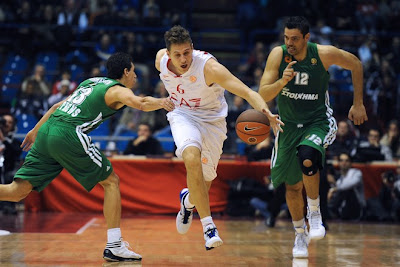 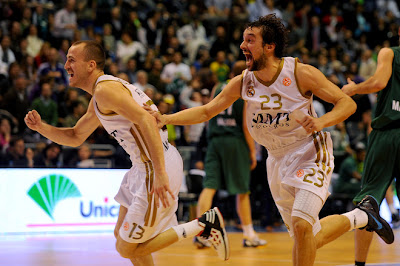 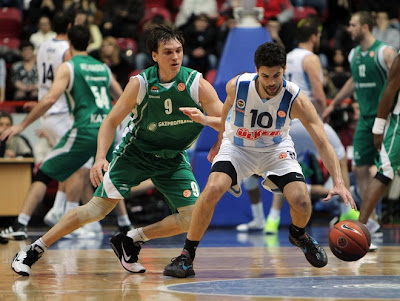 Peter Samoylenco lead Unics to a legendary comeback against Fenerbahce in the second half. When I watch Unics early this season against Sparta Prim (and after against Siena)it was obvious that this team wanted desperetally Samoylenco presence's on the court with so many shooting guards around, in a ''balancing'' role. And that is something that the 35-year old Russian point guard knows how to do it. It's ''his thing'',that brought him in the first level.Back in 2007 Eurobasket,remember him as David Blatt's key in the starting lineup next to J.R. Holden,''slowing down'' the American's enthusiastic playing style and taking the ball off his hands. Samoylenco does the same at Kazan with Domercant,Liday,Greer and McCarty.In the second half Pashutin's plan was based on his -native- point guard's pressure to the ball plus clear mind and right decisions (10 assists). Unics played incredible defense as usuall this year and showed some guts although it was in a very difficult situation. Don't forget that the Russian team had the 2nd best defensive permormance in the competition after the 1st phase (Barcelona 1st,Montepaschi 3rd,all from the same group...) When Pashutin's team manage to cut the lead at 5 points in the 3rd period,it was obvious on the player's faces who was going to win.This epic come back (Veremeenco was huge with 17pts-11reb,32 ranking, from the bench) made the fans in Basket Hall (probably the league's most quite arena)cheer up.For sure,in a similar case on South Europe,the arena would have been demolished.. 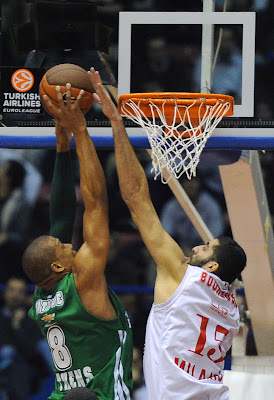 That was what we saw at Mediolanum forum,refer to the direction in which the two groups are working.Panathinaikos made a-tactically-perfect game showing to Armani jeans that there is a big difference from ''want to be a champ'' until ''being a champ''..Obradovic put the ball inside to Batiste (203-F-77, college: Arizona St.) in the start and Saras at the baseline (to pass direct to the paint)later in Scariolo's zone defense.Sato dominated the opponent's forwards and David Logan was the pleasant surprise (12pts-6/6 2p.)giving energy from the bench and that is a fact that the ''greens'' coaching staff will keep from the game,except the two point-win.In EA7 the things are not so bad as they seem.They are worst!I can't remember such an image of dissolution the recent years,even with Pierro Buchi or Dan Peterson in charge.They are a dissapointed group which plays awful in the last games,especially after Hairston's injury.It seems that Scariolo loses his player's trust and can't handle specific problems..After the lost from Biella in the LegaA,he attacked straight to Bourousis accusing him for indifference.The Greek center was nervous and -openly influenced-lost all the battles from his opponents yesterday. At the other side,coach Obradovic silently punishes Logan and Maric in the last games by keeping them ostentatiously,at the bench. In Obradovic's mind,the player during his ''punishment'' must be ready anytime to ''show his regret on the court'' and take the chance.That's what-exactly- Logan did.. 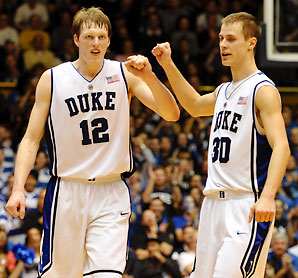 I just wanted to know what David Blatt thinks by seing Kyle Singler (203-F-88, college: Duke) perform like this by his first games in the competition. ''Did i chose the wrong Blue Devil?'' Ok,maybe John Scheyer's performance until now isn't what Maccabi funs expected,but the guy is a special situation. He is trully a great prospect but he needs patience and time. Blatt has a schedule,working on him.In the last games,Scheyer improve his minutes and tries to get in Maccabi's rotation but that's a part of the plan. Smooth integration.. Remember Nick Kalathes development and how much time the youngster spend in the bench listening Obradovic..? Scheyer is a similar case. As coach Blatt revealed,he sees a new ''Nikos Zisis'' on him.Hmmmm maybe,under costruction..

Singler is on the other side. He joined a good club first at the Spanish league's hard competition. He proved his talent and now acclimated directly to a top level situation with Real Madrid. Although he was a combo forward back to Duke,Laso uses him at both ''wing positions'' and the 2.03 American youngster has been adjusted perfectly. Real Madrid took the ''win of the week'' at Martin Carpena,surpassing Luka Zoric's (211-C/F-84) remarkable performance (32pts-13/20 2p.). The other Blue Devil,Martynas Pocious,had 2/9FG (1/6 three pointers at 12:30'!)but Mirotic clutch play just 0.6' before the buzzer gave ''Madridistas'' the big win. Sergio Rodriguez (11pts-9ass)evidenced for one more night how much better is the team with him-instant of Lull- at the point guard position.. 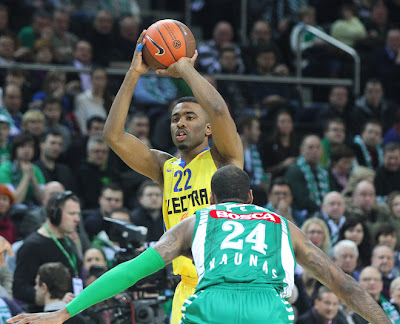 It is obvious that Maccabi has to improve a lot of things to be a real title contender. In front of more than 14000 Zalgiris funs the Israeli powerhouse did an excellent job at the first 19-20 minutes but couldn't control game's tempo in the second half. Blatt started Mallet next to Langford and then replaced both with Oyagon (to defend Popovic,good job but quick fouls)and Scheyer. The ''yellow's''defence on Weems was exemplary,the best so far on the American guard-forward. Maccabi quickly took an advantage but in the secong half,especially when the starting guards were tired,Blatt's players couldn't face Trifunovic's full court press. As a result,Maccabi's offense and mind was influenced and it's players attacking on one-against all-situations at the end of the clock. Big Sofo couldn't defend Rakovic,so Hendrix (203-F/C-86, college: Alabama) stayed more on the court (11pts-6reb-3blk). Inside game was the key of the win for Maccabi who hosts Barcelona next week.One thing's for sure.This year's team hasn't got the cohesion of Blatt's last year's masterpiece,with the hard-nosed guard combination of Perkins and Pargo.. 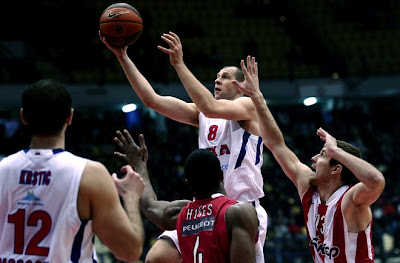 Olympiakos may lost from the undefeated Cska Moscow but the feeling is a little bit weird.The Reds after this loss feel more confident and with much more possibilities to qualify the playoffs.They played an awesome first half with the three youngsters (Mantzaris,Papanikolaou,Sloukas)give some energy and Pero Antic feeling more comfortable next to Joy-muscle mountain-Dorsey.But against Cska you have to be 40' focus and concentrate just to claim the victory.The Reds aren't on this level now but they work in the right direction and they have been improved a lot the last couple of months.The Russians didn't play their best game and that confirms their quality.They won by putting the ball to Krstic (8 fouls rcv,10/12 ft)and they took some clutch plays from Khryapa (his playmaking ability is the center point of the team's offense)and Siskauskas.Cska's scouting receive and A+ Grade for the defense at Spanoulis,although the Greek superstar was not in a good shape due to a recent injury.Kyle Hines's (198-F-86) mobility-key of many victories this year for Ivkovic-at the ''5'' position wasn't enough against a team with so many depth and quality at the frontcourt.It was the first loss for the Reds at Peace & Frienship stadium in front of 7000 fans.It's a season attendance record..